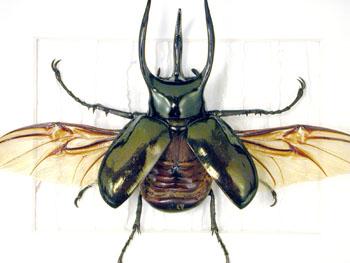 Rhinoceros beetles, also called Hercules and unicorn beetles, are among the largest beetles in the world. They are considered the strongest creature on the planet carrying up to 850 times their own weight.  The body of an adult rhinoceros beetle is covered by a thick exoskeleton. A pair of thick wings lay atop another set of membranous wings underneath. Males can be up to six and a half inches long, including the horns. Females often have a greater body length but are not as long overall. Males and females can be easily distinguished by the horn. Adult males have both an upper and a lower horn that protrudes forward from the head, while females have no horn.
Their best protection from predators is their size and stature. Additionally, since they are nocturnal, they avoid many of their predators during the day. When the sun is out, they hide under logs or in vegetation to camouflage themselves.The adult beetles usually live two to four months. Their larval stage is long, several years in some species. The larvae feed on rotten wood while the adults feed on nectar, plant sap and fruit. Rhinoceros beetle larvae are sometimes fried and eaten as a bush delicacy; the larvae contain much more protein (40%), than chicken (20%) and beef (approximately 18%).

In Asian countries, these beetles are popular pets, are clean, easy to maintain, and safe to handle. Their common name refers to the males’ characteristic horns used in mating battles against other males. Male beetles are also used for gambling fights since they naturally compete for female beetles with the winner knocking the other off a log.