Tropical rainforests cover just 2% of the Earth's land surface, however, they are home to two-thirds of all the living species on the planet- between 50 and 70 million different life forms. Tragically, the tropical rainforests are being destroyed at an alarming rate.
How do butterflies and other insects help save the rainforest?
Raising insects is a conservation effort begun only in the last few decades. The Insect Farming and Trading Agency was formed to control all trade in insect specimens. The IFTA has fostered a program of butterfly farming to encourage protection and preservation of tropical rainforests around the world. In many countries where there is little formal employment, indigenous people are provided an alternative to cutting down the rainforest for the sale of rare woods or stripping land for agriculture. Villagers living in and around the rainforest now have an economic tie to the rainforest by insect raising- a renewable resource in this very fertile ecosystem for insects. This protects the both the rainforest and all the species living there!

Some of the best art in the world is either inspired by nature or is an effort to imitate nature. But there is nothing that comes close to the real thing! The detail and color cannot be duplicated. At art shows across the country the number one question is "are these real?"   Sky Vine uses real museum quality insects, mounted and presented with various backgrounds for a fine art presentation of nature. All the detail and colors of the butterflies and insects are their natural colors- nothing has been enhanced. The specimens are preserved to last a lifetime. 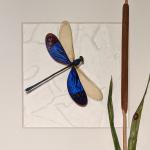 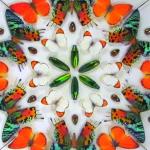