I have just returned from a trip to the west coast. The 100 year old houses in Alameda California were charming. Most homes were decked out for Halloween with huge webs and large eight legged spiders to scare away the trick-or-treaters.

A walk around the block could be quite a trip for the arachnid phobic.

The local spiders have taken up residence between every branch and fence post with both their intricate designs and the messy sheets of webbing-all with the purpose to capture their prey. 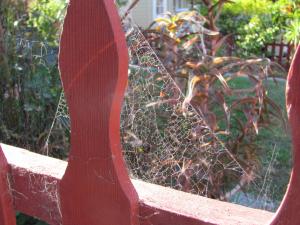 There are three simple forms of web catching designs:

the sheet web, the orb web and the spacial web.

Orb webs are the most well known web design. They are made up of sticky spirals attached to radial threads.

Space webs can be two dimensional or three dimensional webs of sticky spirals. The black widow belongs to the theridiidae family of spiders. They construct messy 3-D spacial webs in which their prey gets entangled.

The linyphiidae family makes a dense horizontal sheet web with non-adhesive threads positioned above it. When an insect flies against a thread it tumbles onto the mat below where it will then be captured.

The wolf spider (agelena canariensis) weaves a sheet web in a funnel design and waits at the end of the funnel for an insect to land on the sheet.

The trap door spider hides in a tunnel that can be closed with a door. If its prey walks over a signal thread, the door is opened and the spider grabs it.

Halloween has taken the most common phobia and used  exaggeration, association, superstition, reaction and scare tactics to the amazing way a spider gathers it's food.

All spiders use their silk for the construction of a cocoon in which the eggs are laid. The cocoon protects the eggs from damage to things like heat, moisture and fungi.

Many spiders guard their silken nests while other spiders leave behind camouflaged egg cases. 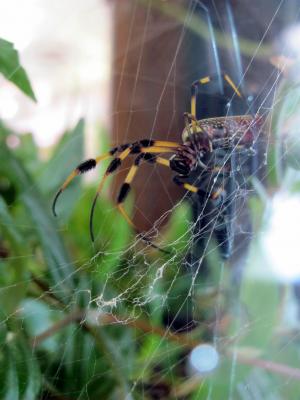 The silk produced by a spider can be used for transportation as well as capturing its prey and for egg protection.

“Ballooning” allows a spider to fly by wire. With abdomen raised,  a thread is released in the breeze that grows longer and longer… until an upward lift transports the spider. "Bridging" is the term used for short distance ballooning- less than 10 cm.

Glands that produce silken threads are located on the abdomen of the spiders. Typically, there are three pairs of spinners.

The thread is both strong and very elastic, made of a protein with built in fungi protection. They recycle their own webs by eating the protein before reweaving a sticky insect catcher.

The human eye cannot detect an object less than 25mm in diameter at the distance of four inches away . The average thread of many webs is only 0.15mm. However, in the morning  the silken threads of a spider web can often be seen on a plant when the sun reflects off the fine threads.

The golden orb weaver, genus Nephila, is an impressive web weaver. It is known for both its web design and webs of steel, stretching 20 times its original length.

The golden orb spider is pictured below, stretched out with its prey entangled in a glass orb web design. 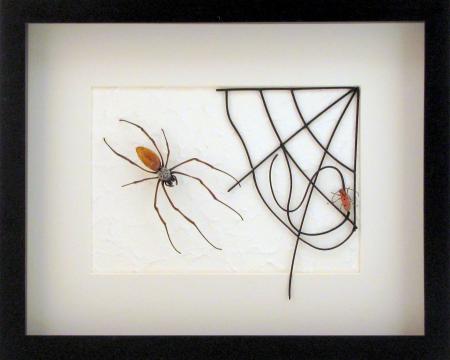